OTTAWA – April 29, 2016 – The Canadian Transportation Agency has announced a 4.8 percent increase in the Volume-Related Composite Price Index (VRCPI), which is used in determining the maximum revenue entitlement for the Canadian National Railway Company (CN) and the Canadian Pacific Railway Company (CP) for the movement of western grain. Decision No. 131-R-2016 sets the index at 1.3275 for the 2016-2017 crop year beginning August 1.

Essentially an inflation factor, the VRCPI reflects a composite of the forecasted prices for railway labour, fuel, material and capital purchases. The VRCPI is one of the numerous factors included in the formula used to calculate the grain revenue entitlement. In determining the annual VRCPI, the Agency examines and verifies detailed railway submissions and collects and analyzes various data to develop the forecasts. The VRCPI of 1.3275 will be applied when the Agency makes its grain revenue entitlement determinations by December 31, 2017 for the 2016-2017 crop year.

Nearly half the increase can be attributed to the sharp decline in the Canada/U.S. exchange rate between 2014 and 2015, and to the fact that the dollar is forecast to decline even further in 2016. The weaker Canadian dollar increases the cost to purchase materials used in the day-to-day operations of the railway companies, as many of these items are purchased in U.S. dollars.

Last year, the Agency’s material price forecasting model underestimated the price change for railway materials in part because third party forecasts used for the Canada/U.S. exchange rate for 2015 and 2016 were too high. Another element contributing to the 2.2 percent increase, but to a lesser degree, is that the weaker dollar increases leased car costs since lease rates are often negotiated in U.S. dollars.

The volatility present in each of the two main components used in the Agency's fuel forecasting models, i.e., the price of crude oil and the exchange rate, render these items, and hence, the price of fuel, very difficult to predict by expert forecasters and the Agency with a high level of accuracy.

The VRCPI has tracked up and down since the beginning of the maximum revenue entitlement regime. In recent years, exceptional fluctuations have reflected the volatility of fuel prices, the one-time, hopper car adjustment in 2007-2008 and, as outlined in Agency Decision No. 149-R-2012, the application of methodologies to better recognize the cost of capital and the effect on the labour price index of the substantial payments made by CN and CP to their pension funds. 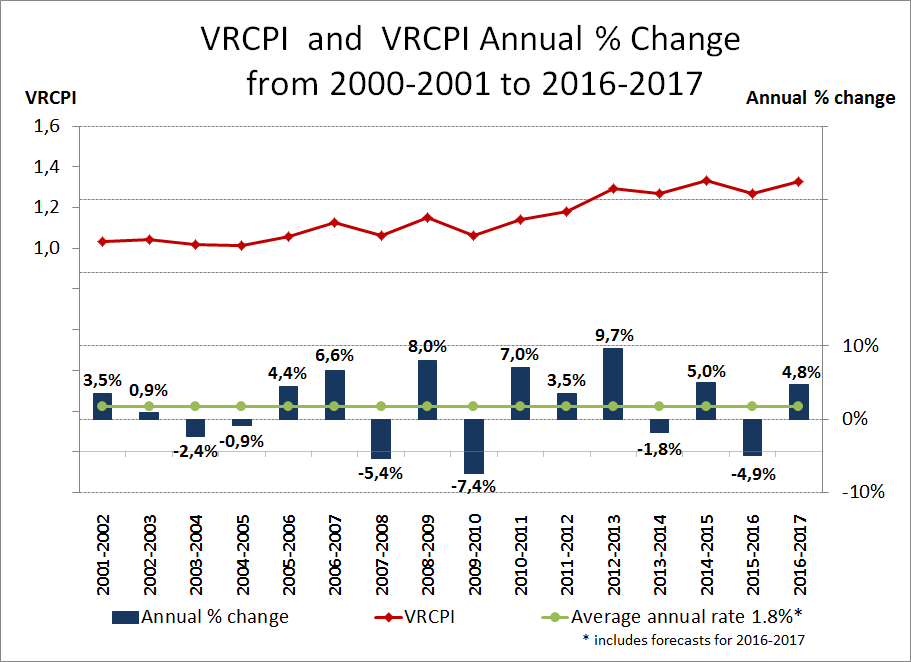 The Canadian Transportation Agency is an independent administrative body of the Government of Canada. It performs two key functions within the federal transportation system:

For more information on the Agency’s maximum revenue entitlement determinations since 2000-2001, please see the Statistics on the Maximum Revenue Entitlement for Western Grain.